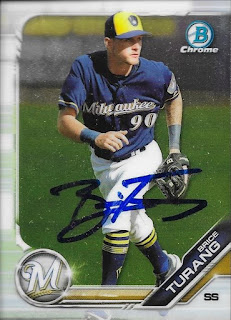 I received a message on Instagram from my friend Dylan in California saying that he was going to an event organized by Daniel Robertson.  There were a good many players attending, and Dylan was nice enough to take some cards off of my hands for a 50/50. 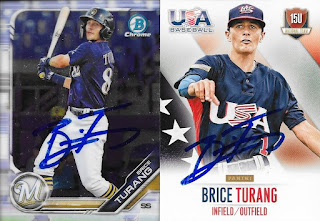 I was really glad that Dylan was willing to take Brice Turang, since I still had a bunch of his cards on hand.  I didn't send him too many, because Dylan wasn't sure how many Turang would sign, but I believe he ended up taking 6 of my cards.  He actually sent 4 signed cards back, so Chris got one of the extras. 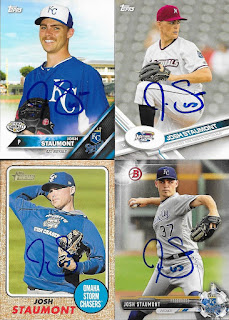 I sent Dylan every Josh Staumont that I had, since I had a bunch of his all together because I thought I would see him with Wilmington.  I never did see him, but it helped that they were all in one place. 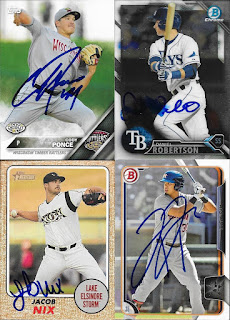 I missed Cody Ponce signing this 2016 Pro Debut, so getting that out of the Box of Shame was nice.  I only had one Daniel Robertson, and Dylan was nice enough to not require another card as part of the 50/50.

I was disappointed that I missed sending him some of my 2013 Perfect Game Jacob Nix cards.  I forgot he was in that set.  It would have been nice to get rid of some of them.

I had the 2015 Bowman Rio Ruiz set aside for Orioles Fan Fest, but since they canceled it, I was able to get one back from Dylan.

Thank you so much for taking the cards, Dylan!
Posted by William Regenthal at 5:33 PM