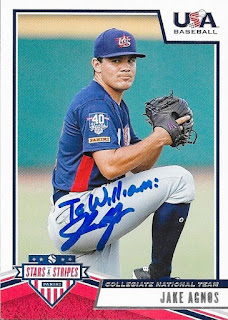 I missed him when he played at ECU, and again when I saw the Pulaski Yankees in Burlington last season, but I finally was able to get my cards signed by Jake Agnos.

I had the Stars and Stripes cards since early last season, then Agnos was drafted by the Yankees in June.  He showed up in the 2019 Bowman Draft set, and I saw that he had been signing TTM.

Agnos (b. 1998) was drafted by the Yankees in the 4th round of the 2019 June Amateur Draft out of ECU.  He had been listed on Pulaski's roster at the end of the season last year, but didn't play for them.  I had been told then that he was placed on that roster as a procedural move.  He pitched at 2 levels in the Yankees system last year, the Gulf Coast Yankees, and Low A Staten Island.  In all, he pitched in 5 games in the minors last year and went 1-2 with 15 strike outs and a 6.75 ERA.

I mailed to Agnos on January 3 and got the cards back on January 13, for a 10-day TAT.
Posted by William Regenthal at 5:55 PM