Chris Got A TTM Back 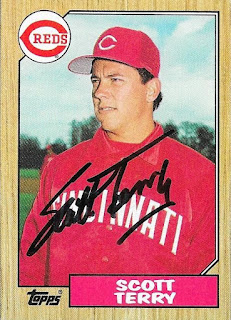 Chris complains to me often that he doesn't get much mail, so a while ago, I sent off a couple TTMs for him, since I had some extra cards.  One of the guys I sent to, I included two 1987 Topps cards, just in case.  I wasn't working on the set at the time, but I thought it would be cool to be able to get an extra one signed.  You know, since I provided the cards, and the stamps, and I wrote the letter and I wrote out the envelope.

Anyway, that was back in February 2016.  Last week, Chris called me at work and told me that he checked the mail (he isn't supposed to be doing that; that's the one thing I want to do when I get home from work) and there weren't any TTMs for me.  Yet, he had one.  So, when I got home, he showed me who he had gotten cards from.  I had to go way back in my notebook to find out when I sent the cards for him.  I sent on February 22, 2016, and he got the cards back on February 14, 2020.  Almost 4 years.

I was all for letting Chris have all of the cards that were returned, until I looked at my 87 checklist, and realized that I still hadn't gotten Terry for myself.  He had left one of the 87s unsigned, but when I told Chris that I still needed Terry for my set, he went in his album and gave me the card.  I swapped it for an extra autograph that I had on my desk (Ernie Clement), so it all worked out.

Terry's success rate averages out to be around 10-14 days, but at 1,453 days, this one must have fallen between the seats in the car along with his jelly of the month club membership.

UPDATE - I must have forgotten to cross Terry off of my checklist, because I actually DID have him for my set, and it was a TTM success that I had gotten back in 2018.  Oops.  I gave Chris his card back, all is well now.
Posted by William Regenthal at 8:36 PM