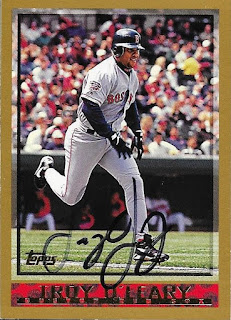 Here are a few cards from the late 90s/early 2000s that I was able to get signed TTM by Troy O'Leary.  He kind of used a fading Sharpie, but the cards are ok, I think.  I have a bunch of signed 1998 Topps, but I hadn't added any new ones in a while. 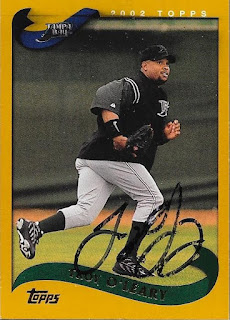 I was surprised that this 2002 Topps bubbled like it did.  I maybe should have prepped it, but I hadn't had to in the past.  Maybe it was the marker he used.

I mailed to O'Leary on October 23 and got the cards back on January 4, for a 73-day TAT.  I had sent him 3 cards, but the third was either lost in the mail (he didn't seal the envelope), or he kept it.
Posted by William Regenthal at 6:16 PM