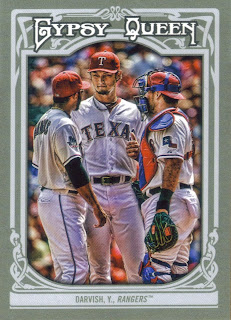 Yesterday was a really good day.  I was able to spend the day with my very good friend, Scott and his Dad since Scott and I both mistakenly thought the Raleigh card show was this weekend.  We had planned to meet up at the show, hang out as long as possible and then grab dinner afterward.  Since we realized that we had the wrong weekend for the show, and since both of us would be unable to attend next weekend, we decided to meet up here at my house.

Scott and his dad rolled in about a quarter to 11 in the morning, just in time to grab some lunch in downtown Greenville.  After lunch, Scott, his dad, Chris and I all did a tour of the two card shops in the area.  At the first card shop, in Kinston, Scott and I decided to go halves on a box so we would have something to bust when we got back to the house.

When we got back home, we split the box evenly and started ripping packs.  Both of us made out with our packs as each got a relic and auto and several short prints.  It wasn't until later that Scott texted me and told me that the Yu Darvish SP I got was, in fact, a super short print photo variation.  Not bad.  I think the odds of pulling one of those is 1:461 packs.  Really not bad. 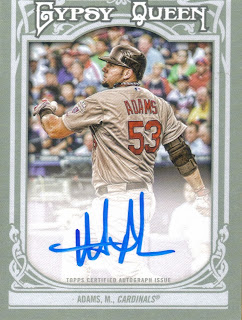 I also pulled this sweet Matt Adams on-card auto.  I know two Cardinals fans who are going to be fighting each other to get this card.  The first one to email me and pony up some cash, will be the victor!

In all, I had a really great day hanging out with a fellow blogger/collector along with his dad, who was awesome enough to bring along some of his own collection (which isn't baseball cards) for us to look at.  It was really cool being able to sit around on the couch and talk about collecting, collecting regrets, auction sites, shows, etc.  I think we all decided that this would become a regular thing, so I'm hoping we all can hang out really soon.  Scott and his dad are awesome folks and I am so glad we got the date wrong on the card show.  This was so much more fun!  Go take a look at Scott's blog and give him some follows.  he's a hell of a guy and deserves more attention for his blog!
Posted by William Regenthal at 5:53 PM