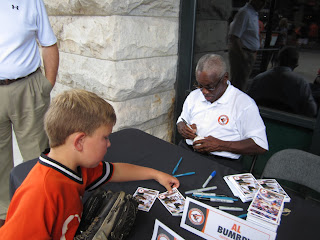 I made my annual trek to Baltimore yesterday to see the Orioles lay an egg against the Rangers (the O's really are limping into the All Star break, uggh).  On this trip, I took my son and also my nephew, Jacob.  It was Jack's first major league game, so I wanted to make sure he had a good time.  Luckily, when I picked up the tickets, I saw that it was going to be an Orioles Alumni autograph signing.  We didn't know who the signers would be until we got to the game, but we lucked out and got Oriole great and former Rookie of the Year, Al Bumbry.  Here is a pic of Chris getting a ball signed by Bumbry. 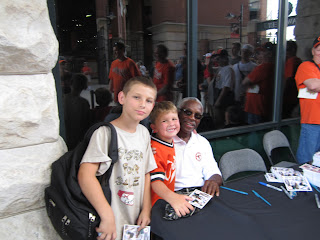 Mr. Bumbry was nice enough to pose for a picture with Jacob and Chris, which was pretty awesome.  There were supposed to be two other guys there (Fred Valentine and Ken Dixon) but they were unable to attend after getting stuck in traffic.  They may have gotten there later, but we took Bumbry and made out way to our seats. 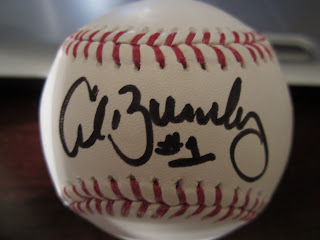