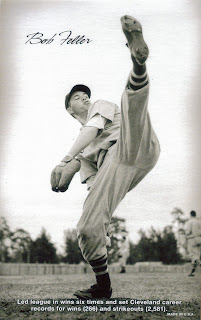 I went to the local card shop last weekend and saw that they had gotten in the new 2013 Panini Golden Age.  I bought a few packs and didn't really get much of anything except for some horse racing cards.  Something I did see, though was that another patron of the shop had busted a box and had a Bob Feller box topper in his box of stuff.  I asked him if he was going to keep it or sell it and when he replied that he was going to sell it, well, I bought it, haha.

This is an enlarged card with the classic high-kick shot of Feller, which is such a great shot.  I can just imagine the force at which that baseball is about to leave his hand.  Yikes.

The card just looks great and I'm glad that the guy was willing to sell it to me for 5 bucks.  I wish Topps would do more box toppers.
Posted by William Regenthal at 7:45 PM