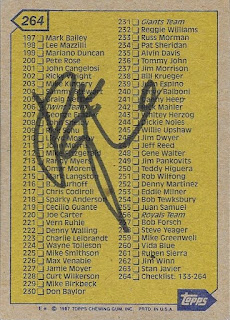 Here is another 1987 Topps checklist that I got signed recently; this one being signed by the 44th Vice President of the US, Dan Quayle.

I mailed to Quayle on August 17 and got the card back on September 19, for a 33-day TAT.  I had also sent the Allen & Ginter Washington Monument card, but he didn't sign that one.

Posted by William Regenthal at 8:13 PM

I would have opted for a checklist while he was VP, but still a great TTM!