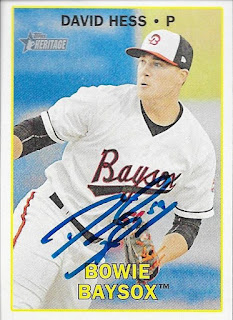 The weekend of Labor Day, Chris and I went to Norfolk to catch a Tides game.  It was the Saturday game, and with it being so short notice, I feel like we still did pretty well in getting some stuff signed.

We had gotten to the field about an hour or so before the gates opened, so he and I walked around a bit so I could get my steps in.  While we were walking, one of the Tides players walked out into the parking lot.  He was on his phone when he walked out, but I got a good look at him.  I consulted the Tides roster and had a decent idea who it might have been, but Chris, having no fear, asked him when he came walking back, who he was.  It was David Hess.  I was glad, because I actually had a card of Hess, so he stopped and signed for me.  He was really nice, and thanked us for coming to the game. 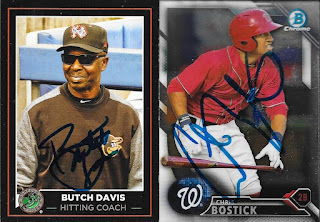 We didn't wait on the Tides side pregame, so we had to try to get some of them outside after the game.  I met a fellow instagrammer, Connor, whom I had done a few 50/50s with.  It was really nice chatting with him, and graphing.

I could have waited outside on the Knights side, but I figured I would recognize the Tides guys a little better, and I knew that a lot of them that I had cards of might not be with the Orioles when Fan Fest comes around.  This was an opportunity to clear out some space in my box. 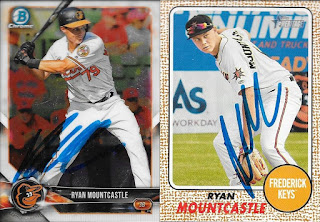 We were pretty excited to get Ryan Mountcastle again.  I hadn't seen him since he was with Frederick, and his offense has blown up pretty well this season.  He will likely be at Fan Fest in January, but I have one specific card I can take to that when it comes time for it. 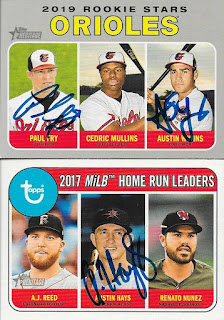 We were able to add to these two trio cards, by having them signed by Austin Wynns and Austin Hays.  I can probably get Mullins at Fan Fest, and same with Renato Nunez (if he isn't traded in the offseason). 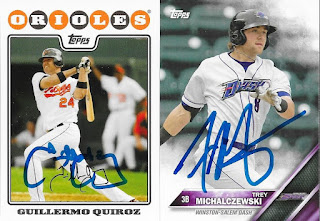 I wasn't as lucky when I tried to get the Knights guys.  The same woman who ran Chris and I off last season was back, but she wasn;t near as rude.  Still, I'm pretty sure I saw her talking with one of the ushers, who eventually ran us off.  The usher had tried right at the start, but another woman in the area told her "They aren't bothering anyone and have been very respectful, so they can stay, I don't mind."  I wish the other woman had been so courteous.

Anyway, Chris and I did our best to stay out of folks' way, and we were able to add these two cards to the album.  I was really disappointed that I left a Panini Diamons Kings card of Thaygo Viera on my desk, as he walked right by us, and stopped to say hello.

Since the Wood Ducks lost in the first round of the Carolina League playoffs, this trip turned out to be our last graphing trip of the season.

Beginning with the Wood Ducks hot stove event in January; encompassing that event, Orioles Fan Fest and the Johnny Bench signing, as well as 63 different minor and major league games, Chris and I got 2,027 autographs this year.  We went to 51 Wood Ducks home games this year.  We also went to home games for the Fayetteville Woodpeckers (their first ever home game), Carolina Mudcats, Augusta Greenjackets, Nashville Sounds, Louisville Bats, West Virginia Power, Bowie Baysox, Hickory Crawdads, Greensboro Grasshoppers, High Point Rockers, Burlington Royals and Norfolk Tides.  We also went to MLB games in Baltimore and St. Louis.  I could have added Columbia to the list, but we were rained out.    I was 28 autographs short of my total from last year, but had I counted the cards I got signed at the National, I would have probably exceeded that total.  Not that it really matters.

All of that being said, it is safe to say that I am tired, and am glad to be gearing up for the offseason.  I am excited about 2020, though, and Chris and I will try to add some more stadiums to my map (which has finally been updated).

Thanks to everyone who I graphed with this summer: Jackson, Dugan, Connor, Adam, Josh, Kaleb, Braden, Tanner, Ben, Billy, John, Erika, Jesse, Keegan, Andrew, Michael, and anyone else I may have forgotten to mention.  I know he won't read this, but I also want to thank my travel partner, and the best graphing helper, Chris.  I know this isn't really your thing, but you are a good sport with it, and help a lot more than you know.  I am just glad that I have a simple enough hobby that I can take my son along and spend some time with him.  Our trips last year to Texas, and this year to Illinois/Kentucky, etc were a lot of fun.  Now, go wash that Augusta shirt!
Posted by William Regenthal at 11:44 AM