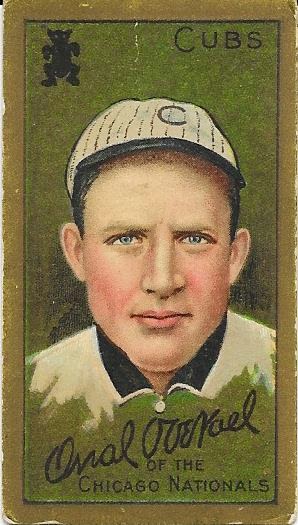 Very rarely do I post a card that I know will not be headed to my PC.  I purchased this 1911 T-205 Orval Overall card as a gift for my good friend and Cubs fan, Max.  I saw the card and price it had been set at, and picked it up for him.  He had told me that his oldest card was a 1933 Goudey and I wanted to see if I could do better.  I feel like I did.

As it turned out, Max wouldn't let me send him this card for free.  He offered up an awesome trade piece, which I should be receiving very soon.  I really enjoy sending random cards to my friends, and I had a lot of fun finding this one for him.  I know he will enjoy it.

Something else that I think Max will enjoy is that he will now own a baseball card that was printed during a player's career who actually won a World Series with the Cubs!  Overall won twice with the Cubs, in 1907 and 1908.  I thought that was really cool.  I hope he does as well.

By the way, the card is a Sweet Caporal back.
Posted by William Regenthal at 7:54 PM