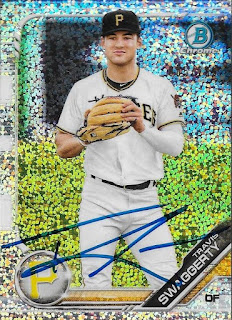 Before the world ended, my friend, Gerard was able to get a few autos from Spring Training.  He had gotten to Florida right when things with the Corona Virus were just taking hold.  The Orioles and Twins had just enacted "No Fan Interaction" policies and were tossing pre-signed baseballs into the stands.

Gerard had much better luck with the Pirates minor leaguers that he saw, so thankfully, all of the work I put into getting cards together for him wasn't completely in vain.

The above 2019 Bowman Chrome sparkle parallel of Travis Swaggerty made my day when I saw it.  I pulled it out of a pack and was afraid I wouldn't be able to get it signed.  It looks really cool, and I am so glad Gerard nailed this one. 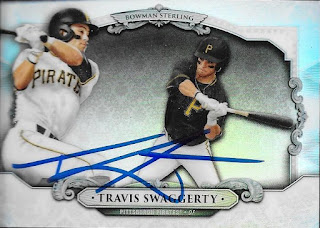 This 2018 Bowman Sterling insert of Swaggerty also turned out well.  This was another card that I kept seeing in my box, but I was afraid that I wouldn't be able to get signed. 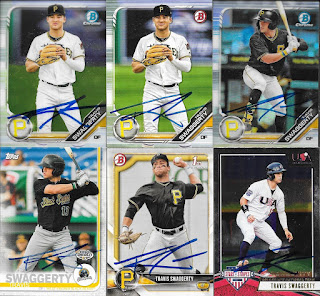 Gerard was able to get every Swaggerty that I sent signed.  He was able to keep a good many for himself, as well. 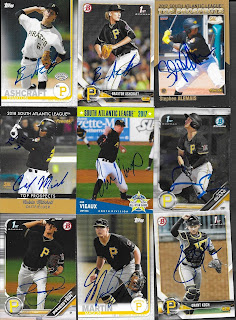 Gerard was able to hit almost every Pirates prospect that I had sent, with the exception of maybe 3 or 4 guys.  I was especially happy to get some of the Sally League all star and top prospect set cards done, as once those guys have passed through the Carolinas, I have a hard time seeing them.

I had a ton of Conner Uselton.  Gerard got every one of them done.  I like the three above because they look like one of those puzzle images where you have to find the differences in each photo. 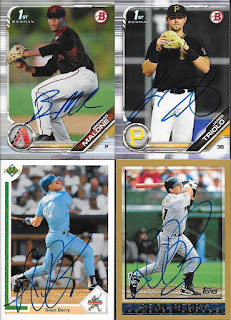 Gerard struck out on the Orioles when he saw them, with the exception of soon-to-be Norfolk coach, Sean Berry.  I had been stockpiling Berry cards ever since he was named to Norfolk's coaching staff.  I was glad to get some of these out of my box, for sure. 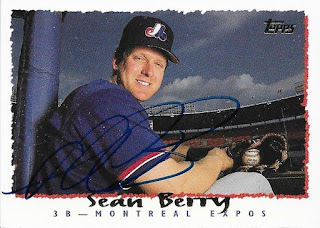 This 1995 Topps of Sean Berry turned out nicely. 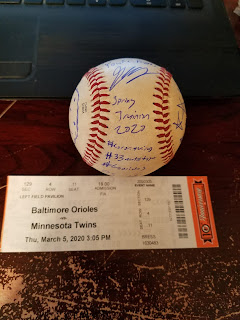 Finally, Gerard hooked me up with a baseball that he signed himself, including a coronavirus hashtag.  I might look back on this ball some day and it could be a pretty huge historical event.  Especially if the season is delayed any farther.

The ticket was from Adley Rutschmann's first Spring hit, I believe.  Gerard told me, but I forgot what he said.

Thanks so much for the autos, Gerard.  I hope you used enough hand sanitizer and are able to get back home safely.
Posted by William Regenthal at 7:53 PM