All Things Must Come To An End 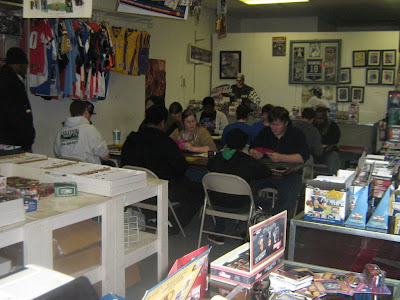 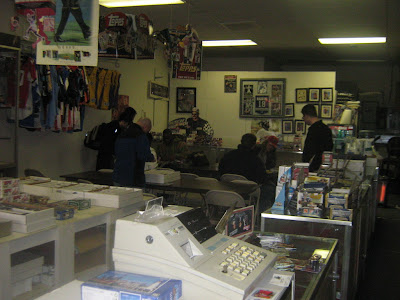 I knew it was coming when supplies stopped being ordered, but I hoped that something could be done to keep the doors open longer, but, the inevitable happened yesterday: The card shop I've been helping out at has finally gone out of business.
.
I have worked hard over the last several months doing everything I could to get some sales in (going to card shows, etc) but it wasn't enough. The economy crash of 2008-2009 and the ever increasing amount of card related websites has done in the neighborhood card shop.
.
The rent for the place was ridiculous, I won't disclose the amount, but I find it hard to see how the shop owner ever turned a profit with the amount of overhead that he had. Once his construction business tanked, I knew it was going to be hard for the shop to stay open.
.
To me, the worst part is what will all of the kids who came in on Saturdays end up doing now? Most were really gppd kids who I will keep in touch with, but I know that some of them will turn to 'alternate' forms of entertainment and will most likely go down some less than savory paths.
.
My lack of a part-time job doesn't concern me near as much as the fact that I'll probably never have the same experience as i was able to have at the shop. Most of the people who came in there thought I owned the place, but, I didn't. I wish, but I don't have enough money to invest in something like that. It is really sad, you HAVE to have benefits and health care. If I had my own shop, I don't know how long I would be able to sustain it and be able to pay for necessities for my wife and son. I hope to be able to open one, one day, but as it looks right now, it won't be for a while.
.
So, it was a great ride, the four years I was there. I'm going to miss a lot of the people who have come in.
Posted by William Regenthal at 2:00 PM

Sorry to hear this. For all that I love the convenience of the internet, there's something to be said for physical places that allow people to interact with each other. We're really losing that with the new economy.

Always sad to hear. I was secretly envious of you working in what seemed to be a very cool shop.

I feel more badly for you not being able to work there, than that the card shop is closing.

I appreciate that. I'd like to find another I can help with, but that's doubtful. I'm really going to miss the kids most of all.

Despite their lessening popularity, I am always bothered when LCS's close their doors. Just like how card companies keep monopolizing their markets, the internet has monopolized the retail side of collecting.

Bummer... I used to work in 2 different card shops (once when I was in college & another after I became a teacher). Both have closed their doors. It's just too hard for them to compete with so many online options. I've thought about this a lot and I haven't been able to come up with a solution. Hopefully the two shops left in my area will be able to stay afloat.

NOTICED YOUR 1948 BOWMAN BASEBALL NEEDS ... I HAVE CARD #24 dutch leonard SP FOR YOU AVAILABLE,,

PLEASE LET ME KNOW ,, I NEED TO SELL
FRANKICARDs@aol.com

:( I feel so bad. Our card shop gets decent business but it seems if a shop is not involved with online business it will close. My dream is to work at or own a card shop one day, and I'm sorry that you had to witness it happen.