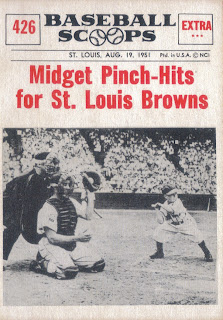 I love how PC this card is, a 'midget' pinch hitting for the Browns.  I guess 'Little Person' might have taken up more room.  If you know about the history of baseball, then you have to know about Eddie Gaedel.  Gaedel was the shortest person to ever play in a Major League game.  At 3' 7" tall, he was walked on four pitches in his only major league at bat.  Gaedel was used by the Browns' then-owner, Bill Veeck as a publicity stunt.  The Browns were one of the worst teams in the league and Veeck did everything he could to drum up attendance. 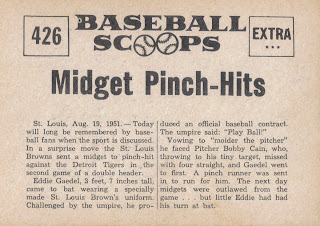 You can click on the image of the back of the card to read more about Gaedel's at bat.

Eddie Gaedel (b. 1925 - d. 1961) wore number 1/8 for the Browns in his only plate appearance.  His contract was voided shortly after the game.  He went on to work for Bill Veeck in promotional capacities.  He died in 1961 after he was beaten and possibly mugged in his home.
Posted by William Regenthal at 1:01 PM

I really need to find a copy of this one for myself. Great find!

Eddie's grave is right by my mom's house. I really should swing by it as it's the same cemetery as my grandparents and a couple in-laws.