I was bored, so I decided to look through my folder on my laptop of the random baseball cards I have scanned over the years for this blog.  While looking through the folder, I saw something that caught my eye, a 2009 Topps Career Quest auto of Andrew McCutchen.  I instantly got mad at myself because if the card was a 2009 issue, then odds were that I had sole it for cheap at one of the card shows back then because I didn't know how big of a star McCutchen would become. 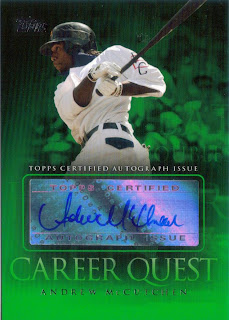 I'm so glad I was wrong.  I decided to make sure I didn't sell it, so I went through my sale box and the card was nowhere to be found.  I, then, went through my 'keeper' box and not too many cards into the box, I found it.  Whew, I was smart enough in 2009 to slide the card into a top loader and hide it away with my good stuff.  I'm really glad I did now, because McCutchen is really becoming one of my favorite non-Orioles.  I'm also glad I didn't sell it because I took a look at completed listings on Ebay and saw that recently, only one of these had been listed and it sold for $39.99.  Very nice.  Had I sold it at a show, one of the sketchy other dealers would have probably only offered me $5.00 for it.  That's the one thing I don't like about setting up at the shows, the guys who come and try to tell you that what you have isn't worth what you've priced it at and they make you feel like they are doing you a favor for buying from you at a 95% discount.  Blehh.

Anyway, if the season ended today, I don't think it would be too much of a stretch of the imagination that McCutchen would run away with the NL MVP.  He is batting .373 at this moment with 22 home runs, 66 RBIs and is leading an improbably Pirates team that looks destined for the playoffs for the first time since 1992.

I'm really happy that I didn't sell this card.  Sometimes the best deals you make are the ones that aren't made at all.
Posted by William Regenthal at 9:33 PM

Great card man! I picked up a Bowman Platinum relic auto of his last year for a low price because he was slumping, and I feel really smart for doing so. Great to see the Pirates become fun to root for again.