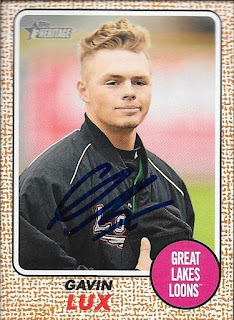 Believe it or not, I actually hate trading.  Usually, it is a long, drawn out process where you have to haggle with folks and/or meet their demands to pull something decent off.  I prefer the arrangements I have with friend such as Max or Gerard where we just send each other stuff we think the other would like, and in the end, things kind of wash out.

That's not to be said,though, that I won't pull off a trade here and there.  Recently, a guy on Instagram named Al approached me about trading our extra prospect autos from IP graphing.  I keep a box of extra autos just for this reason, and with the cards that I had built up, I made a pretty sweet deal.

Al was super generous with his cards, and I didn't know he would be at the start.  I wasn't paying a whole lot of attention to the deal until he sent me some photos of cards he was making available.  The 2017 Topps Heritage Minors Gavin Lux is the card that got my attention, and ultimately what persuaded me to strike a deal.

I had a couple unsigned versions of the card, but I had no way of seeing Lux in person in order to get one signed.  I know he is a really well thought of prospect, so I was hoping I would have a chance to get him at some point. 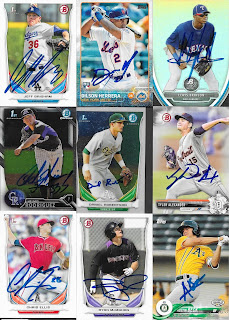 Al and I basically did a card-for-card trade, but the autograph he was most focused on was Nick Madrigal.  I had one left, and was able to include it in the deal.  I think including that card set the wheels in motion on Al's end, and I think the both of us are very excited about each person's returns.  I was able to get: Lux, Jeff Brigham, Dilson Herrera, Lewis Brinson, Tyler Alexander, Helmis Rodriguez, Daniel Robertson, Chris Ellis, Ryan McMahon, Austin Beck... 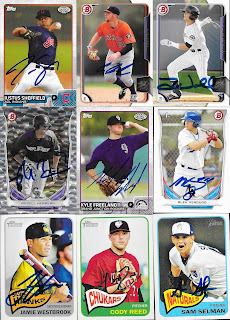 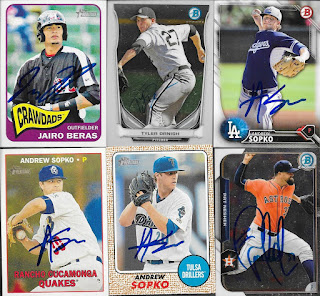 Jairo!, Tyler Danish, Andrew Sopko x 3, and Pat Neshek.  Al also included autos of Josh Morgan and Collin Wiles, but I already had them, so those will either be included in a future trade with someone else, or they'll make it into a gift or something.

I was very happy with my deal with Al.  He and I agreed to do some 50/50s together, if the season can ever get going.
Posted by William Regenthal at 5:16 PM