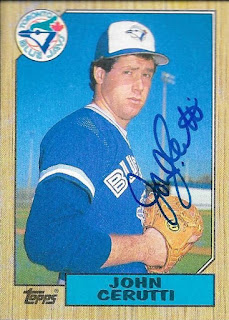 Another of the deceased players I picked up on an 87 Topps was John Cerutti.  This was a nice card, that didn't cost me a whole lot.  The dealer broke up his signed 1987 Topps set, and I benefited from it.

Cerutti was supposed to call the final game of the season for the Blue Jays versus the Yankees on October 3, 2004.  When he missed a pregame meeting, police were calle din to break down his hotel room door, where he was found lifeless.  He had passed away from a heart condition (ventricular arrhythmia).  He was 44.
Posted by William Regenthal at 10:07 PM