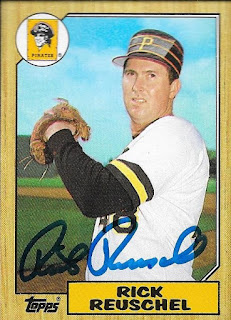 I got him TTM a few years ago, but I was able to add some more Rick Reuschel cards to my album when I met him at the National this year.  Reuschel has since stopped signing TTM, and of course I screwed up and didn't send the two most important cards to him.

For whatever reason, I left out the 1987 Topps, so I was able to finally cross it off of my set checklist. 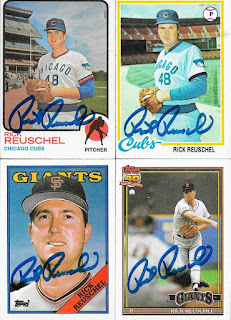 I didn't yet have these cards done by Reuschel, so it was nice to get them done.  He took a ton of my Wild Card vouchers, which was even better.  I was able to get rid of most of the old ones that I had, and that proved to be a big help in getting a lot of cards signed throughout the event. 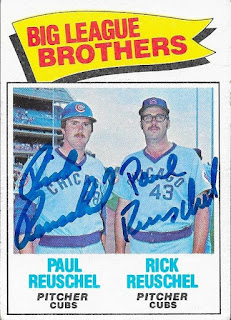 While I was really glad I got my 1987 signed, this 1977 Big League Brothers card was the one that I really wanted to get signed.  I had gotten Paul Reuschel on the card TTM back in 2016 or so, and I was afraid that if I sent TTM to Rick (especially since he hadn't been signing), it would get lost.

The card is finally complete and will go back in its place in my album.
Posted by William Regenthal at 11:12 AM