Another TTM Success From Pat Neshek 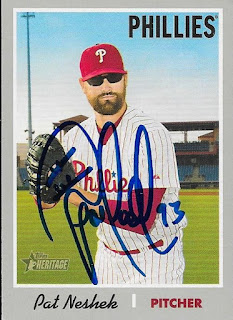 When 2019 Heritage came out, I had to get the Pat Neshek from the set signed.  The card is cool as it is, but when you read more into it, it is even better.  Topps wanted to throw some subtle winks into the set, like they always do, and this card pays homage to the original set in that it resembles the Lowell Palmer card from 1970.  Neshek, himself, is a huge fan of that set, and was apparently elated when Topps approached him about recreating the Palmer card.

The card turned out really when when signed, and I am happy to be adding it to my album. 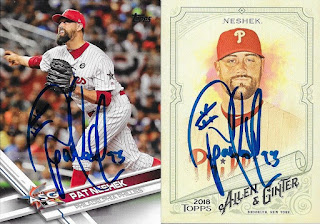 I got these two cards back from Neshek, as I always send him autos for his collection.  These were really nice cards to get back from him. 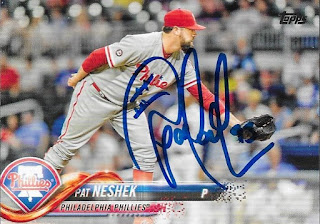 I had originally thought I was done sending to Neshek, but since the Heritage came out, I tossed this 2018 Topps in as well.

I mailed to Neshek on March 5 and got the cards back on March 14, for a 9-day TAT.  I sent to him via Phillies Spring Training.
Posted by William Regenthal at 5:46 PM