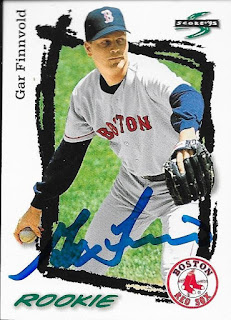 I had Gar Finnvold's cards in my to be TTMed box probably as long as I have had the box.  I just kept passing over his cards until I finally got around to sending to him.  I'm glad I did, because the cards I got signed were nice ones.  The above 1995 Score rookie card turned out really well.

Posted by William Regenthal at 11:01 PM