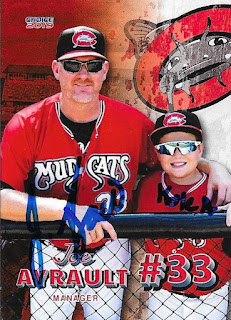 This past week, the Mudcats came ot Kinston to take on the Wood Ducks.  I was able to get most of the 2019 Mudcats team set taken care of.  The only cards I am missing are guys who have moved up or are injured, much like my Wood Ducks set.

I was really glad to get two signatures on Joe Ayrault's card, as his son was at the game.  I had Kole sign the card, first as he came off of the field after the first game of Thursday's Double Header.  Tuesday rained out, and Wednesday was an 11AM game, so the two games on Thursday were my shot to get the cards done.

Joe had been ejected during the first game, but signed for me before the second game.  He had let his emotions calm down and told me that it was a whole new game. 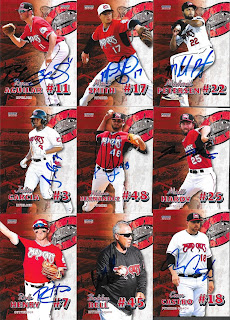 I love this team set, and am glad that I am just about done with it. 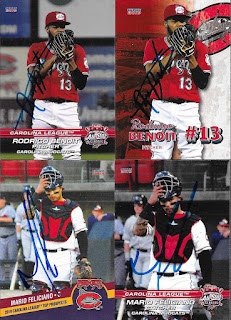 I also got some All Star and top prospects cards done from each set.

I don't think I am going to try to get Jonah Mergen's kids to sign this card, even though I do see them from time to time at the ballpark. 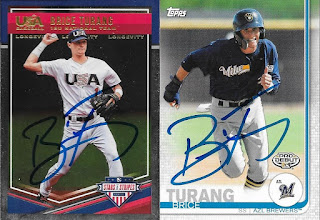 Brice Turang was pretty nice this time around.  It seemed as if he was in a better mood signing, which helped out. 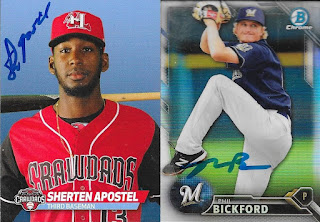 It is always a lot of fun to see Phil Bickford, and with Sherten Apostel's addition to the roster, I was able to get a card done from my Hickory set.
Posted by William Regenthal at 9:39 PM